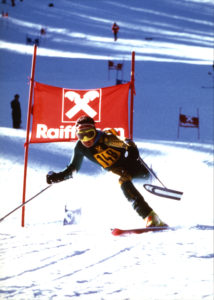 Alpine skiing, or downhill skiing, is the sport or recreation of sliding down snow-covered hills on skis with fixed-heel bindings. It is characterized by the requirement for mechanical assistance getting to the top of the hill, since the equipment does not allow efficient walking or hiking, unlike cross-country skis which use free-heel bindings.

It is typically practiced at ski resorts which provide services such as ski lifts, artificial snow making and grooming, first aid, and restaurants. Back-country skiers use alpine skiing equipment to ski off the marked pistes, in some cases with the assistance of snowmobiles, helicopters or snowcats. Alpine skiing has been an event at the Winter Olympic Games since 1936 (except for the 1940 games). A skier following the fall line will reach the maximum possible speed for that slope. A skier with skis pointed perpendicular to the fall line, across the hill instead of down it, will accelerate more slowly.

The speed of descent down any given hill can be controlled by changing the angle of motion in relation to the fall line, skiing across the hill rather than down it. Downhill skiing technique focuses on the use of turns to smoothly turn the skis from one direction to another. Additionally, the skier can use the same techniques to turn the ski away from the direction of movement, generating skidding forces between the skis and snow which further control the speed of the descent. Good technique results in a flowing motion from one descent angle to another one, adjusting the angle as needed to match changes in the steepness of the run. This looks more like a single series of S’s than turns followed by straight sections.

The oldest and still common form of alpine ski turn is the stem, turning the front of the skis sideways from the body so they form an angle against the direction of travel.