Home » Uncategorized » VR is all the Rage Today

VR is all the Rage Today

Technology seems to be moving at an incredibly fast past now. I still remember having a flip phone with the game “Snake” on it and that was considered high-tech. Now, our cell phones are like mini computers. Our video games look like they are almost real. We have curved TVs and now Virtual Reality (VR) is all the rage. It occured to me what is so special about these VR headsets and what sets the $20 one apart from the $2,000 ones.

I’m sure you’ve heard of the Google Cardboard, a VR headset made out of household materials but can bring the immersive experience of virtual reality to you. The cardboard ranges from $7-$95 CAD, just depending on the style and size you choose. The Google Cardboard is mainly for people to experiement and try out the VR headsets and figure out if it is worth it for them to get a higher end one. Also, Google had the intention to create the Google Cardboard to encourage developers to create VR applications for different softwares. And a cool thing is now Google Cardboard will start being integrated into classrooms so children can have a virtual tour or trip somewhere with their teachers guiding them to enhance the learning experience.

VR Headsets for the Curious

Now, I can understand that some people would prefer not to spend $20 on a piece of cardboard for a VR viewer. They rather pay a little more and get a nicer quality product. Moving away from low-range virtual reality systems we move towards the Samsung Gear VR. Similar to this produce is the LG 360 VR, Zeiss VR One, and Homido. However, Samsung’s Gear VR still seems to be taking the cake on the best mid-range VR headset. Samsung has more apps, videos, and games in their system compared to other headsets. These mid-range headsets all range between $100-$300 CAD. So, what is deciding factor on this item versus the Google Cardboard. Well, the mid-range ones for started have head straps so you do not have to hold them as you explore or play. The mid-range ones run much more smoother than the Cardboard. For people who wear glasses you can wear the mid-range ones without your glasses and adjust the focal length till you can see. The only trade-off is portabliity, the Cardboard is much easier to pack. 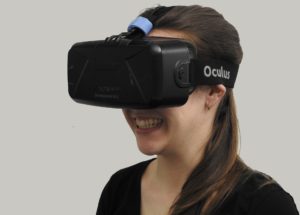 If you are truly invested into the VR products then you’ll be looking to either purchase the Oculus Rift with controllers ($818 CAD), Playstation VR ($550 CAD excluding Playstation Move controllers and camera), or the HTC Vive including controllers ($1,149 CAD). These are currently the top of the line VR headsets and they all definitely do not dissapoint. But as you know the price point reflects which one is the bottom tier high-end headsets and which are the top of the line.  Each one of these headsets can track your position just the range may vary depending on your space and which headset you go with. A con that you must note is that none of these headsets are wireless and they use cables must run on the Windows Software. And for the Playstation VR it’ll obviously need to run on the Playstation. Now the difference you need to note is how immersive this is. There are great platforms that support every one of them. From experience my experience with the Vive and Oculus. I found that the VIve tracks position much better. While the Oculus Rift has a more natural controller to work with. I have yet to try the Playstation VR but this VR system is more affordable, the images may not be as crisp but it still gives you the higher end feel of virtual worlds.

Time to Pick One

With all this information now you can decide which one will suit you best. Whether you just want to experiment or really dig into this new software. Each product is a great tool into virtual reality and just being exposed to what it can do. The only note to make is that the higher end models are more for a VR gaming experience so if you aren’t looking to play too many games on it then you really don’t need to consider it, unless you really just want it.